When is ultra-fast Internet speed important to you? For example when do you find yourself thinking: “I wish the Internet speed here was a lot faster” when you’re doing what or when you are where? I asked a few of my fellow Fios Ambassadors ( both of whom rely on their internet connection and speed to power their professional lives) and this is what they said:

Amanda from Manhattan with a Twist: Definitely need Fast Internet speed when I’m on a deadline and need to get everything done on time! I like to have all the info and research I need at my fingertips so I usually have multiple websites open as I write an article.”

Shawna from Emma Westchester says: “I work from home so it’s critical that I have fast Internet during “working” hours, however it’s essential when I’m on conference calls and need to send and/or receive large data files in real-time to share and discuss with those on the call.”

While Shawna and Amanda both understand the critical need for speed. According to The Beacon for many people, Internet speed doesn’t translate into anything meaningful. They can’t put into words the difference between 3, 50 and 500 Megabits per second, or Mbps. So in layman’s terms why does your family household likely need the fastest speed? Because in today’s technological world almost every household has multiple web-enabled devices – smartphones, laptops, tablets and gaming systems and with the fastest Internet speeds, you can get the best use out of all your gadgets.

Let me set the scene of a typical night in our house: my 16 year old is using her laptop, my husband is using his laptop, my son is using his phone and TWO iPads at once ( the kid lives for multi-tasking) and I am on an iPad, my phone and my laptop. With slow internet speed you often have at the hands of cable and satellite internet, everything a family like mine loves to do on a typical night – gaming, surfing the web, downloading and watching movies  and these will be slowed down and delayed. So basically none of us would really be able to use our tech devices properly and would likely be complaining that nothing is downloading and everything is going at a snail’s pace!

Being a Fios ambassador and a full fledged member of their network — which is powered by fiber-optic cable that transmits the data signal to one’s home via laser-generated pulses of light (this signal is then converted by an Optical Network Terminal (ONT) to be understood by your computer and Because the ONT is at your home, you get faster internet speeds that aren’t compromised by others’ Internet use–We have been able to use all our devices at the same time with no complaints about speed. I really didn’t think it could get ANY BETTER. Apparently IT CAN and it will with the new launch of Fios Gigabit connection which guarantees the same great programming but gives you Internet speeds 20 times faster than most people have and the ability to use 100 devices at once. EXCUUSE ME?????.

So just what is this warp-like speed and the future of Internet service? Keep reading! 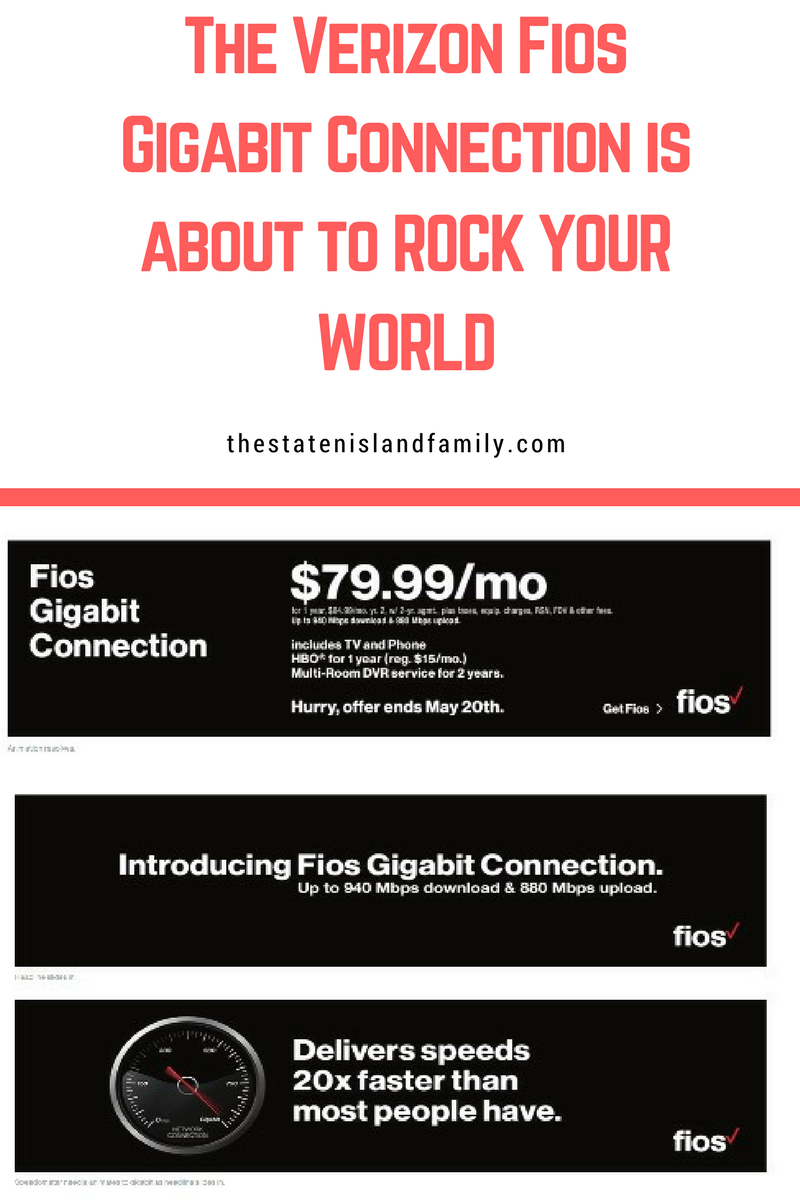 Fios Gigabit Connection is available to over 8 million homes in parts of the New York, New Jersey, Philadelphia, Richmond, Va., Hampton Roads, Va., Boston and Washington, D.C. areas – that’s a more than one million home increase from the Instant Internet footprint with the Washington, D.C. market getting access to Verizon’s top Internet speeds for the first time.

Fios Gigabit Connection service bundled with Fios Custom TV and Digital Voice service is available online for $79.99 in year one and $84.99 in year two, with a two-year agreement.

So are your ready to take your internet speed to the NEXT LEVEL of awesome? Share in the comments!