Looking for Memorial Day weekend reads for kids? This weekend parents can sit down with their children to read The Flag Keeper by Stacy Juba and illustrated by Larry Drumtra, either in softcover or on an e-reader in the days leading up to Memorial Day weekend or as a wind-down bedtime activity that night. 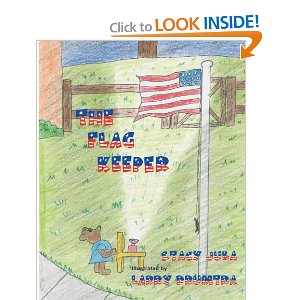 The PLOT: The Flag Keeper is an educational picture book with illustrations of a bear family.   Elizabeth and her dad always raise and lower their American flag together, but when he leaves on a business trip, their flag is stuck in the garage. Elizabeth is determined to prove that she is responsible enough to display the flag herself, following all the rules of flag etiquette.

Memorial Day weekend reads for kids Why we love it:  The Flag Keeper engages children through colorful and gentle teddy bear illustrations and through a fiction story about a child determined to solve her problems all by herself. It is unique as it includes several discussion questions and flag facts at the end that reinforce the flag etiquette information woven into the story. Parents can read the story aloud, and then talk further about flag etiquette.   For example, kids learn that an upside down flag is the sign of an emergency, that flags should only be left out with a spotlight, that there are certain proper ways to dispose of an old and tattered flag, and that there is even a flag on the moon. The book is also unique as it was written and illustrated by a father and daughter, and tells the story of a fictional father and daughter. 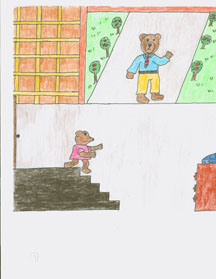 What will kids go gaga for: Young children will love the teddy bear illustrations and whimsical pictures. Kids will also enjoy the activity ideas in the book. One of the activity ideas is for parents to print out a flag coloring sheet from the Internet and to have kids color it, and then to teach children how to correctly fold a flag using the instructions in the book. If parents have a real flag, they can fold a real flag instead.

Parent Perks: It’s a nice way for parents and children to bond and connect. Not only can they read a patriotic story that has a tie-in to Memorial Day, they can also use the discussion questions to open up a dialogue and teach their children about flag etiquette and the U.S. flag code, a topic that is often overlooked in schools and in other books.   All of the material has been vetted by the national American Legion and national VFW Headquarters, so it is all accurate.   Families that have a relative who is serving in the military or who has served in the past can talk about patriotism and what the flag represents to their family on a more personal level. Parents who are Girl Scout or Boy Scout leaders may also want to share the book with their troops later in the year. Families with flag poles might be inspired to begin a new family tradition, raising and lowering the flag together each day.

Overall:   Reading The Flag Keeper is a terrific way for parents and kids to spend time together and enhance their celebration of Memorial Day.   It helps parents to keep their children reading and learning in the summer months, and moms and dads will even learn something themselves. The book can also be pulled out at other times of year, such as The Fourth of July, Columbus Day, Veterans Day, and Flag Day.

Information: http://stacyjuba.com/blog/books-2/childrens-picture-books/ for reviews, a book trailer and retail links.