Several days ago during a routine pickup from school my ten-year-old daughter seemed to float into the car. Really it was almost as if she had bitty gossamer wings strapped to her back. And while she's a generally happy kid her demeanor had an air of excitement that was unusual. So like any good parent, rather than the kind who continues to text and e-mail on their smart phone once they've briefly acknowledged their kid's presence and ensured that no arms, legs or book bags were left precariously dangling out of any car doors- I actually put down my obsession and asked my daughter how her day was because of course I am NOT one of THOSE parents!(or at least I'm trying NOT TO BE!) 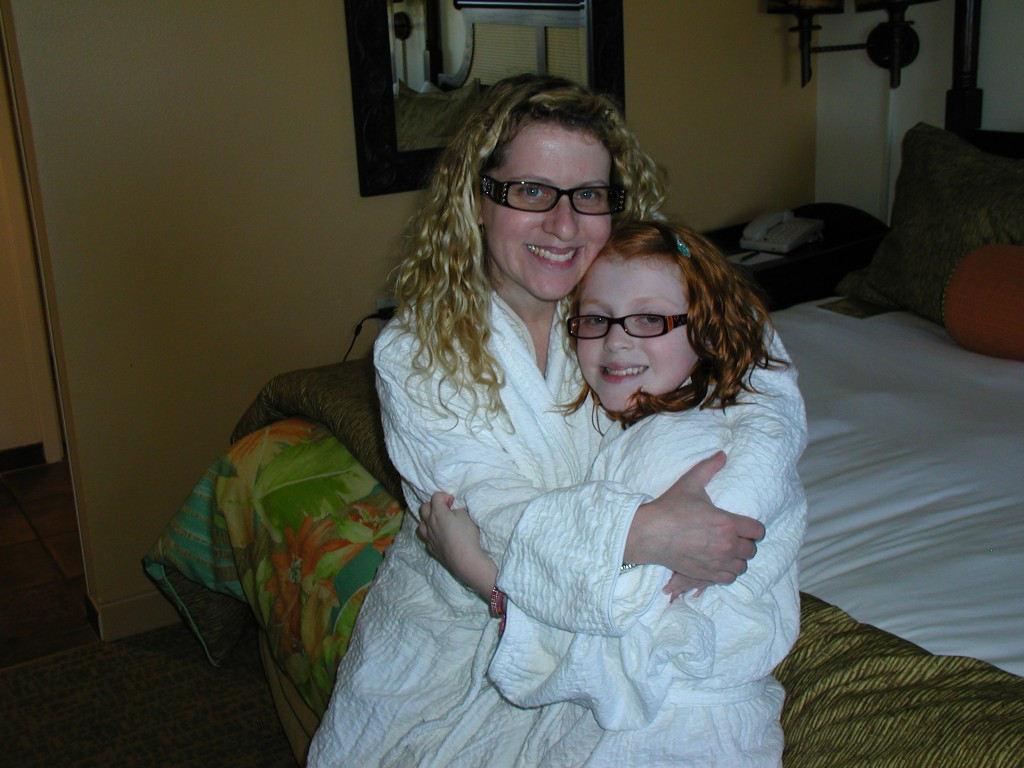 She looked at me with these dreamy eyes; ones which seemed to sparkle like glistening blue pools and said, “Oh mommy something wonderful happened today.” Of course I immediately thought my little brown noser (yeah she's a bit of a teacher's pet) must have gotten a good mark on her spelling test but nothing could've prepared me for what she was about to say, “Michael said I looked beautiful in my glasses.”

Now let me give you just a bit of background here… my little redhead has been given the decree by her doctor that she must wear glasses all the time and unlike the Disney tween starlets she so completely adores, she feels that only thin-lipped librarians, wearing tight pinned up buns wear glasses. And despite the fact that I think her glasses which rest comfortably on the bridge of her little nose- are so much a part of her unique beauty, it pains me that when she looks in the mirror-her glasses overshadow those sweet peaches and cream colored cheeks.

A full-time glasses wearing mama myself- I've repeatedly made a point of choosing my glasses over contacts on almost every occasion- telling her I think girls who wear glasses are both smart and gorgeous… but I'm just her mom, my opinion doesn't hold nearly as much street cred as Miley's or Selena's.

So back to my tale, I ask her… “Really Joshua said that to you, how sweet, what happened?

“Well mommy, when I was sitting and waiting for you to pick me up one of the boys' came over to me and said, ‘ What are you doing here?' I said, “I'm waiting for my mom. Then the boy grabbed my glasses and started teasing me saying, ‘Ha ha ha, now you can't see.' After that happened, Joshua came over to me and I told him what happened. And that's when he told me that he thought I looked beautiful in my glasses.

I couldn't help but get a bit ferklempt… I mean the fact this boy was actually saying these things to her of his own volition, without any coaxing or chocolate, well it was exactly the type of compliment she needed to feel less self- conscious about wearing them and I could see how these few precious words had already reinvigorated her sense of self.

The next day when I picked her up from school, that smile, while still there had lost a bit of its luster. Of course I asked her what happened.

“I went over to Joshua and told him thank you for making me feel better yesterday and he looked at me and said, ‘What do you mean?' He didn't even remember what he said to me!”

I looked her and thought- poor baby that the bubble she was encapsulated in was so easily deflated. Unfortunately even at the tender age of nine Joshua is the typical male; possessing attributes eerily similar to that of pretty much every guy I've known. Like my daughter I too have experienced similar interactions with the opposite sexâ€”ones which I construed as meaningful only to conclude that they were merely a blip on the radar screen to them. And that's if they even remembered what the heck I was talking about… Sounds exactly like life with my husband…